The membership of learned societies forms a versatile network of experts

Learned societies comprise researchers, experts, professionals and science enthusiasts from different organisations and sectors. The findings from a survey for society members confirm that the Federation of Finnish Learned Societies represents a wide spectrum of the Finnish scientific community through its member societies.

There are hundreds of active learned societies in Finland with the aim of promoting the conditions for their field of research and disseminating scientific knowledge. The learned societies play a significant role as publishers of scientific journals, organisers of conferences and other scientific events and providers of cooperation opportunities for researchers and other parties.

The Federation of Finnish Learned Societies have almost 300 member societies that have about 270 000 individual members. Until now, there has been a lack of knowledge about the membership. 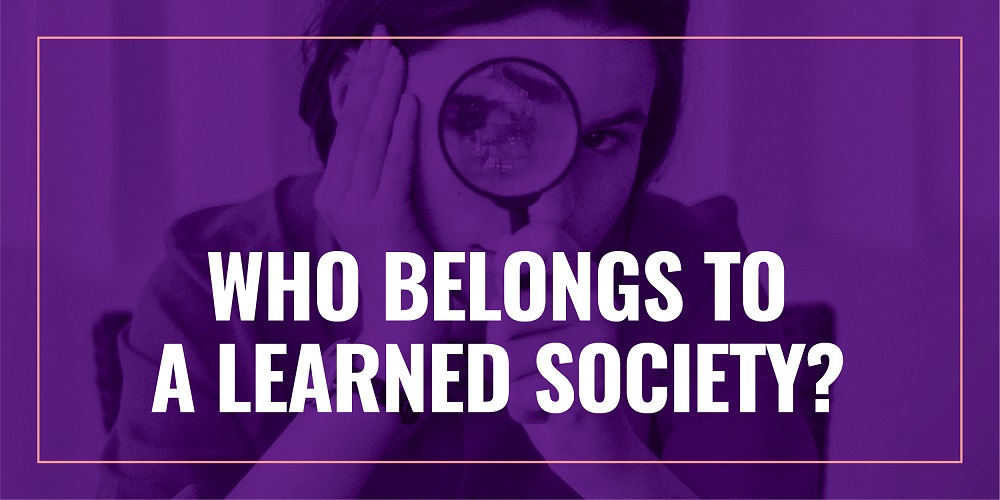 The Federation of Finnish Learned Societies conducted a survey for the members of Finnish and international learned societies in spring 2022. The data consist of responses from 1 650 individuals and it offers a comprehensive picture of the background of the members and about their reasons belonging to societies.

The membership of the learned societies represents the Finnish science and research community across a broad spectrum. The typical learned society member is a highly educated person who works in a research organisation, utilises or produces research-based knowledge and is over 50 years old.

Although professors, lecturers and researchers constitute the core of the membership, the survey shows that particularly Finnish learned societies form communities whose members are active not only in institutions of higher education and research institutes, but also in the public and private sectors and in foundations. The membership of international societies is more concentrated in research organisations (see Figure 1.). 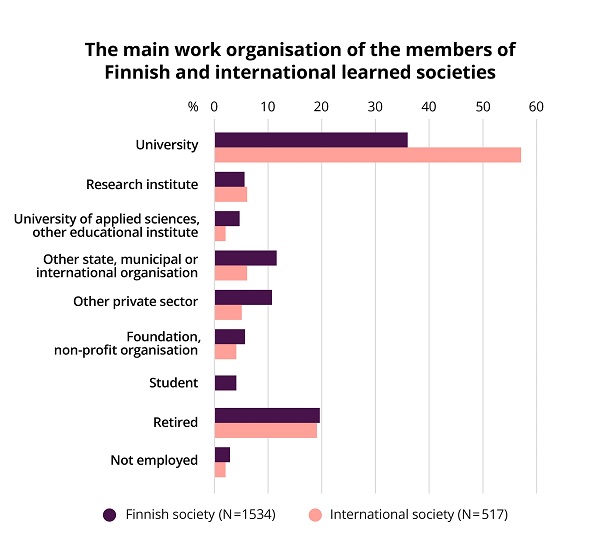 Figure 1. The main work organisation of the members of Finnish and international learned societies.

Almost all survey respondents spoke Finnish or Swedish fluently, which may indicate that Finnish societies may not have been able to integrate foreign researchers working in Finland widely into their membership. 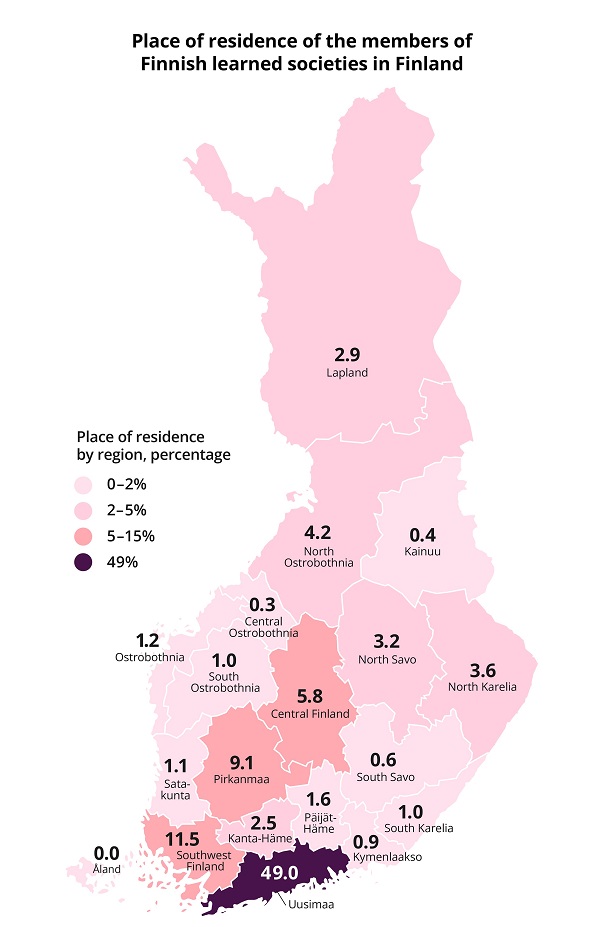 Figure 2. Place of residence of the members of Finnish learned societies in Finland.

However, based on findings from the earlier survey, the societies are particularly interested in getting more young researchers involved. Only a handful of students responded to the survey which may indicate a low number of students in the membership. Yet, the large number of pensioners among the respondents shows that learned societies offer a scientific community for many retired researchers.

Membership of learned societies is motivated by communality, the promotion of science and an interest in learning new (Figure 3). About half of the respondents were motivated by event participation and publications as member benefits.

One of the worries of Finnish learned societies is that the transition to open scholarly publishing will drive members away, as journals become available for reading without paying a membership fee. The membership survey shows that members are rarely motivated by only one factor: almost 90 per cent of the respondents selected more than one motive, with about 60 per cent selecting four different motivating factors for their membership. 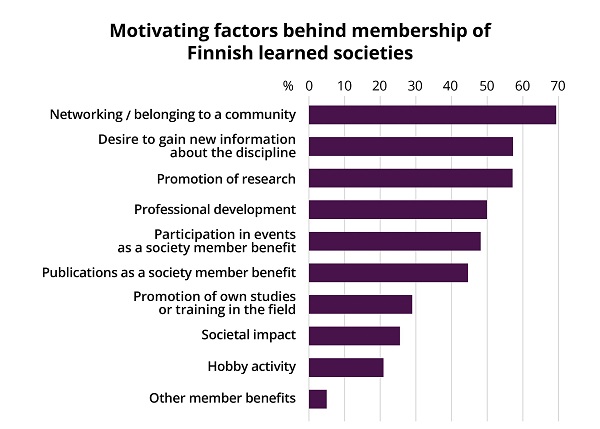 Members value the activities of the societies

Participation in events had also been active, although the coronavirus pandemic had had an effect on the organisation of events and participation in them. In the 2021 membership survey of the Federation of Finnish Learned Societies, almost 80 per cent of the learned societies stated that the society had to cancel planned events as a result of the pandemic. Finnish societies have also moved their operations to virtual environments in the last few years. 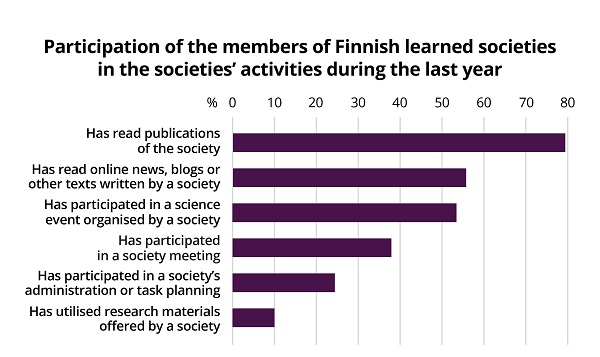 Figure 4. Participation of the members of Finnish learned societies in the societies’ activities during the last year. N=1540

The creation of community spirit and networks was seen as the most important tasks of learned societies. The survey also shows that, in addition to the traditional forms of operation, such as networking, publications and events, the members consider the promotion of responsible science to be an important task of learned societies. The members see the openness of research-based knowledge, influence on science policy and society, the defending of researchers and the promotion of research integrity and responsible evaluation as significant areas of the societies’ operations (see Figure 5). 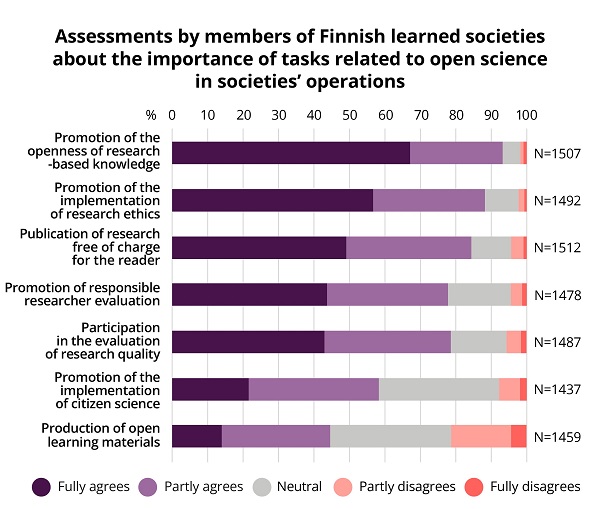 Figure 5. Assessments by members of Finnish learned societies about the importance of tasks related to open science in societies’ operations.

Membership is given up when life or work situation changes

– Interesting websites and activity on social media channels promote membership acquisition, and especially the membership acquisition of the students. A common-sense discussion about science, sharing interesting content and reporting on the society’s activities reach new potential members. Being active in science events is also a way to get new members involved, explains the communication and event coordinator of the Federation Kaisa Kivipuro.

– Basically, students and those interested in the discipline want to be members of the society, because it enables the accumulation of interesting and useful information and contacts. 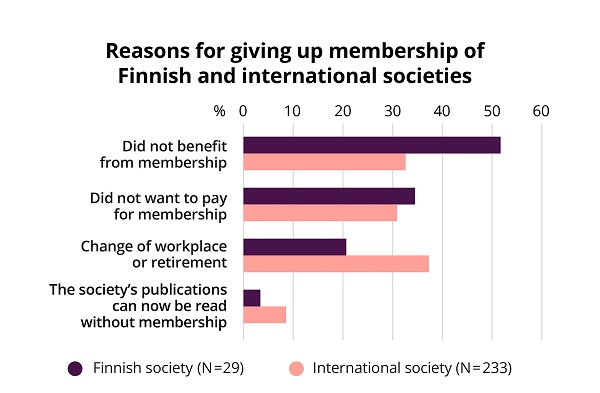 Figure 6. Reasons for giving up membership of Finnish and international societies.

New information about the reading practices of national and international journals

The survey also investigated the reading practices of scientific journals. International and national scholarly journals are important sources of scientific knowledge for the members of the societies. The most frequently mentioned reasons for reading a journal were keeping up to date, general interest and for fun, and reading for research and writing.

Finnish journals are most commonly read in the humanities and social sciences. In these fields national scholarly journals are more valued as publishing channels (see Figure 7). In fields where publishing is more focused on international channels, the domestic journals are considered as less important. 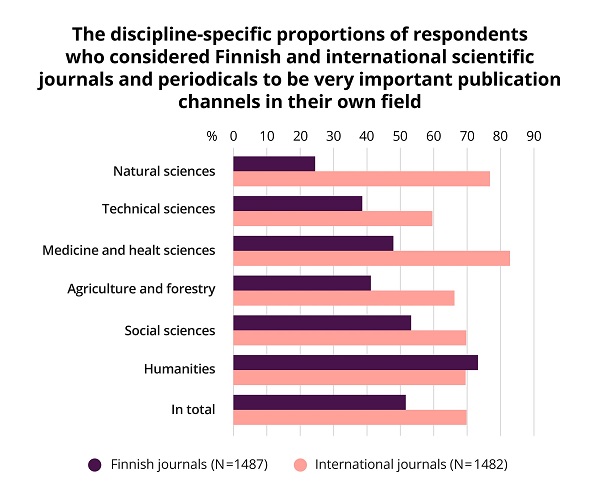 Figure 7. The discipline-specific proportions of respondents who considered Finnish and international scientific journals and periodicals to be very important publication channels in their own field.

Scientific journals are typically read in digital form, but national journals in particular are also read in a printed form (see Figure 8). This may be influenced by the fact that scholarly journals published in domestic languages serve not only researchers, but also other groups of users who still value printed journals.

One of the key findings of the survey is that although the scientific community is widely shifting towards a digital and open environment, there is also a persisting demand for printed journals, especially in the case of Finnish publications. In 2018, about 65 percent of the societies that participated in a survey published both a printed and a digital journal, and 28 percent only a digital journal. 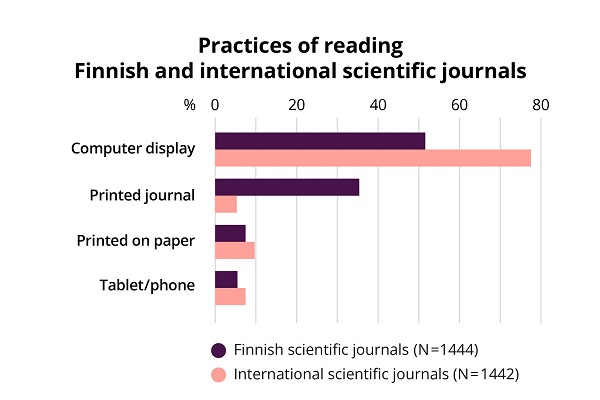 The survey for learned societies carried out in 2021 and the membership survey carried out this year provide both for the societies and The Federation of Finnish Learned Societies new and important information for the development of their operations.

Based on the society survey, the majority of societies were interested in developing their activities in one or more areas of responsible science: identifying and proposing experts to working groups, committees or as evaluators (65 % of societies), promoting open science and organising events (more than 50 %), evaluating the quality of research (more than 40 %), assessment of social impact, science education and research ethics (approx. 30 %).

An important result of the membership survey is that the personal members of the societies clearly see the broad-based promotion of responsible and open science as an important part of the activities of the societies. This knowledge base will certainly give societies material to think about their future operating methods and principles.

For The Federation, the survey results provide a strong basis for producing and developing services that can support societies in promoting responsible science even more widely for the benefit of the entire Finnish science and research community and society.

– The survey provides us useful information how to support the activities of the members and develop their skills. It also helps us to develop our services which we offer to the members. Hopefully, the results of the survey will give the societies ideas for how to get new student members, and feed their sense of trust about how important their work is for the scientific community and society, says executive director of the Federation for Finnish Learned Societies Lea Ryynänen-Karjalainen.

Who belongs to a learned society? A report on the findings of the membership survey among learned societies (2022) is openly available in Edition.fi.

Learned Societies and Responsible Research: Results of the survey for the TSV member societies (2022) reports the activities of learned societies in the area of responsible science.